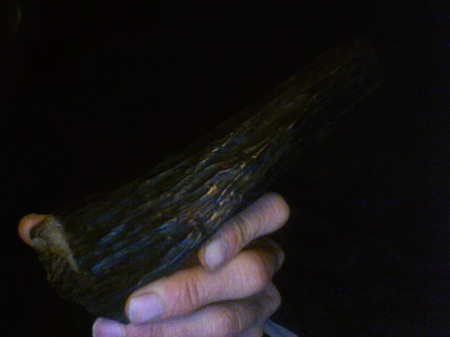 Carbonized million year old redwood limb. Carbonized wood, and coal, are one of the natural ways that the biosphere stores (sequesters) carbon dioxide. Originally carbon dioxide was released from volcanoes, and then plants, removed and balanced the excess carbon dioxide from the atmosphere, by the following reaction powered by the energy from the nearest star. H2O + CO2 = Sugar molecule = further biosynthesis = starch, cellulose, protein and so on. So plants take light energy to fuse Co2 with water to make sugars, to power the biosythesis of more plant tissues, and then plants die decompose, or are eaten, or respire and then the Co2 is released.

There are yet more cycles of carbon. Volcanoes emit carbon dioxide, ocean, mantle rocks react with Co2 in ocean ocean water to sequester Co2, Some rock types such weather and capture Co2.

Fossil sea shells take Co2 from sea water and then sequester carbon in the form of CaCO3? Calcium carbonate. However, if the water becomes acidic from absorbing too much carbon dioxide, then the mollusk will not have an alkaline enough of water to precipitate out calcium, to make the shell.

Fossil diatoms sink to the deep sea bottom each with a bit of oil.

At shallow ocean depths, calcium carbonate can precipitate out of sea water, and then sequester carbon dioxide as if settles into a mass and forms limestone CaCo3?, but at depth, the pressure increases the solubility of carbon dioxide, and this makes carbonic acid that keeps calcium dissolved. Sea mount calcium carbonate limestone precipitate rock picture here. Turbidite with limestone and chert (flint) show that below the carbon cline that only silica can survive the acid and stay as an ooze or gel on the sea floor. This gel eventually hardens into chert, commonly called flint. The limestone on a sea mount travels with the tectonic plate from the spreading center and then collides with the continent to form an onshore deposit that is mined and then heated for portland cement and in the process the carbon dioxide in the rock is driven off to make ten percent of the human carbon footprint.

Black adobe sculpture. Adobe and other clay soils that have been compacted densely for years can be shaped and direct fired. Skipping the mucking and plastic clay forming step yields a harder product with less working and firing energy. Adobe block wall.

The coloration of dark soils are usually due to carbon. Some soils will naturally sequester up to fifty percent carbon by weight and soils that are below their potential can be managed to increase the amount of carbon sequestered.

Desert soil carbonates sequester large amounts of carbon in the form of bicarbonate of soda, calcium carbonate, and sodium carbonate.

Carbon cycle graphics with minerals and plants and animals that are a part of it here.